I have a fun birthday card today, my son’s friend asked if I could make a birthday card for his sister, his request was, could it have a horse, possibly a barn, and some kind of pop up/fun feature, and I said “Hay ya” 😂

To see another spinner square pop up https://mymessycraftroom.me/2019/02/13/my-naughty-valentine/

The star of today’s card is Cocoa the horse. I used Karen Burnistons die set to create him. It’s hard to tell in the photo but I used microsuede for his body, chenille for his tail and mane and leather for his hoofs (all are fabric swatches that I was lucky enough to get my hands on). I originally made him on a black background but thought he was too dark so I made him again on a lighter background. I used the lighter one on this card. 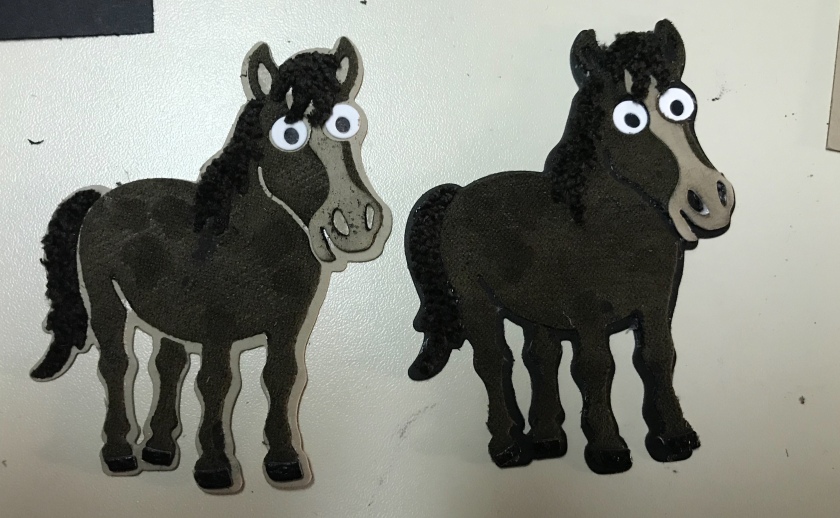 This card features Karen Burnistons Spinner Square POP Up die set http://karenburniston.com/spinner-square-pop-up/ (Karen has 2 videos, I recommend watching them both as it is a tricky mechanism but well worth it)

The card base size of this card is 51/2″ x 5 1/2″ That I cut out of Tempting Turquoise cardstock. I cut 2 pieces of a turquoise flower print patterned paper for the sky (retired SU paper) it is cut at 51/4″ x 3ish” and then I cut a light green flowered paper (Costco stash) to 5 1/4 and I trimmed it with cloud edges to give a rolling hills kind of look. I didn’t take the blue all the way down as I knew I would have to cut the window and I knew that it would be too much to cut through cardstock and 2 layers of paper, so the green just barely overlaps the blue.  I taped the square die to cut out the window and the tape happened to rip the paper ☹️

So is did 2 more layers of the hills and I sponged them with Certainly Celery ink with each layer a little darker as they get closer to the front, this cover the bottom rip.

When I was deciding on how to do the front, I wanted it to look like a barn, but prettyish as it is an 18th birthday card for a girl so I chose a deep red patterned paper with a rustic swirly design on it (Costco stash). I cut a Whisper White piece of cardstock that I cut to 51/2″ x 5 1/2″ to cover the entire card front then I added the red paper which is cut to 51/4″ x 51/4″. I tried to use the same die that I originally used to cut the window, to cut through the red paper but it was all too thick so I had to carefully use a craft knife (it’s a little rough)

The barn door was a little tricky as the window is too big,  I only wanted the horses head to show through and not his whole body so first I made a big window frame to cover the original hole, then I cut another window frame, and another for spare parts and I just Frankensteined them together, I also cut an extra piece of the red to fill in the gap. 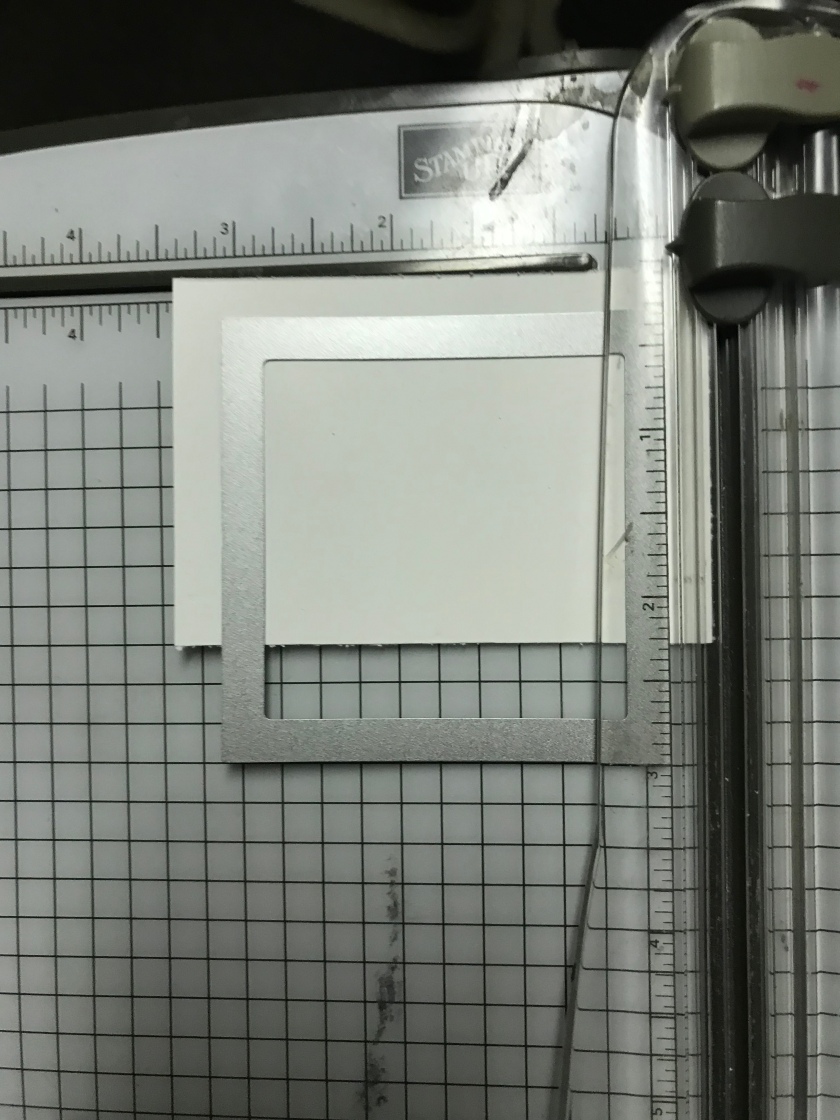 (Oops I forgot to take a pic of just the door)

The inside of the card also had to get a little extra TLC as you could see the red paper from the inside.

So I trimmed a little piece of the green paper to cover the gap. 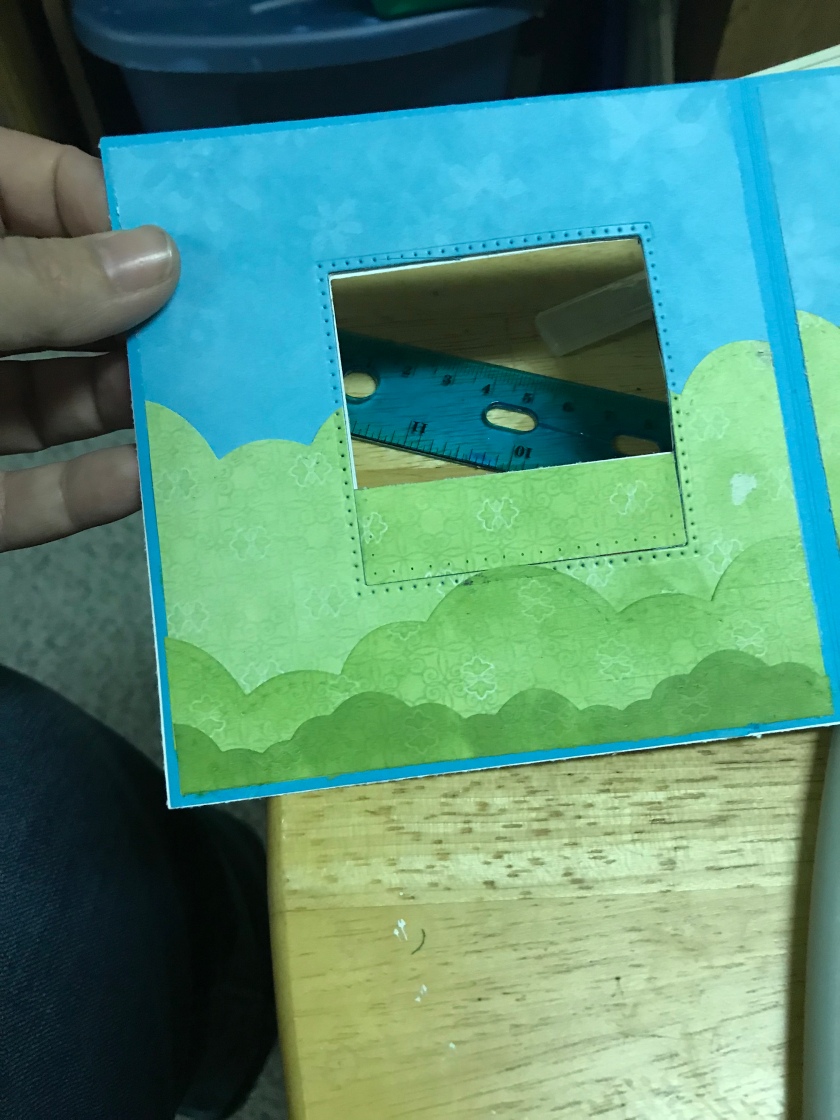 Here are some pics of the different stages of creating the mechanism, please watch the video that I linked above for directions.

Adding the rectangle and the arm. The arm is a piece of Certainly Celery cardstock with the green patterned paper adhered to it. I decided on the rectangle because when I was checking for sizing with the horse either his head was going to be too high or his feet would be below the square (if I had used a square instead of the rectangle)

Decorated the rectangle to match the background

Next, I added cocoa the horse to the rectangle.

I stamped Happy Birthday onto a cloud, I added extra clouds for more details, and I cut out quite a few balloons and streamers. Most of them are from Karen’s Explosion pop up set http://karenburniston.com/explosion-pop-up/ the largest balloons are from my stash that I purchased second hand. I stamped one large one with the greeting and left one large one for the signature. I added most of the balloons to the spinner square arm, and I added a few to hide the seams around where I had to fix the window from the inside and to hide the other little rip.

For the front, I added the “Hay There” greeting, and the bale of hay and the pitchfork. All these dies are originally from Karen Burniston but I ran the pitchfork and hay through my scan n cut to make them bigger as they seemed really small in front of such a large barn. I sponged the pitchfork with darker grey ink and I added details to the Hay with a coordinating Crushed Curry marker. 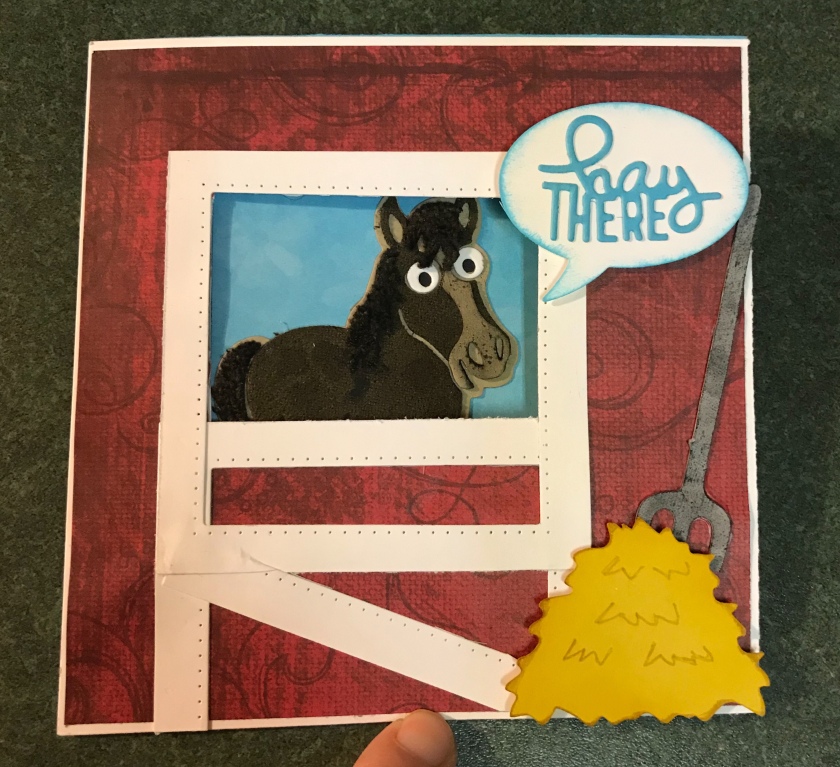 Here are some extra photos and some close-ups 😊

Check out how Fuzzy Cocoa is. 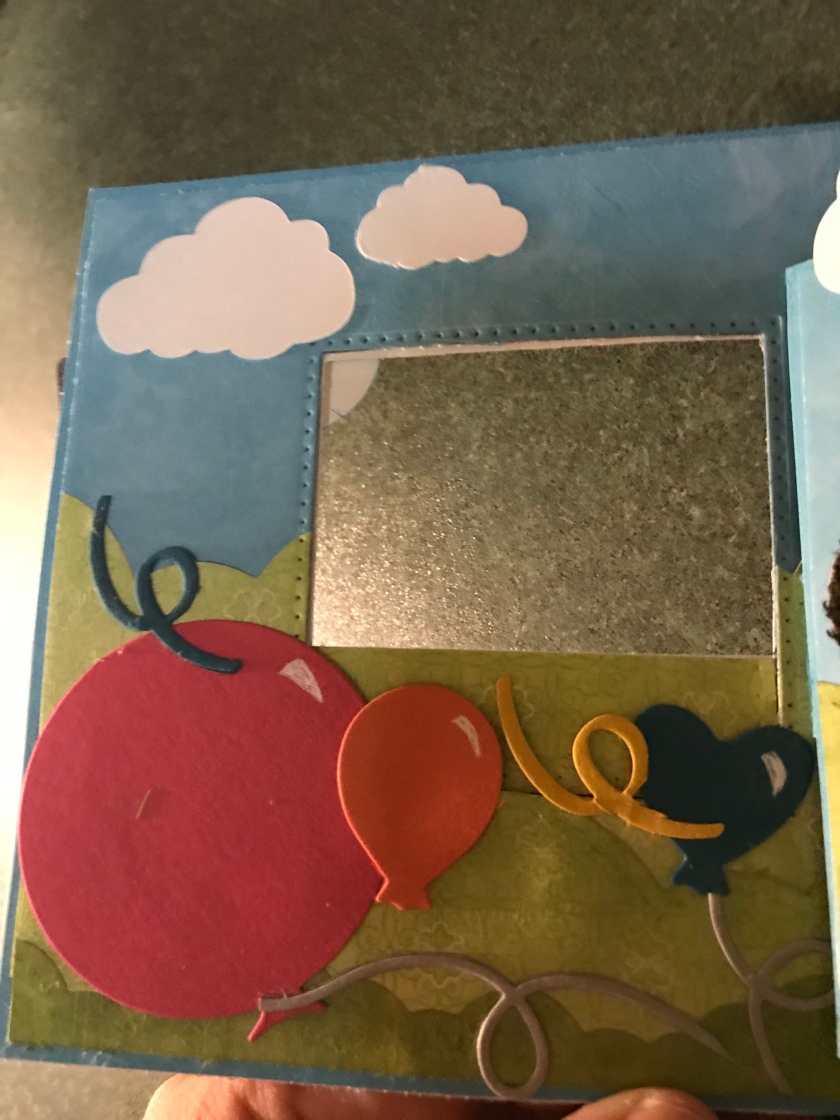 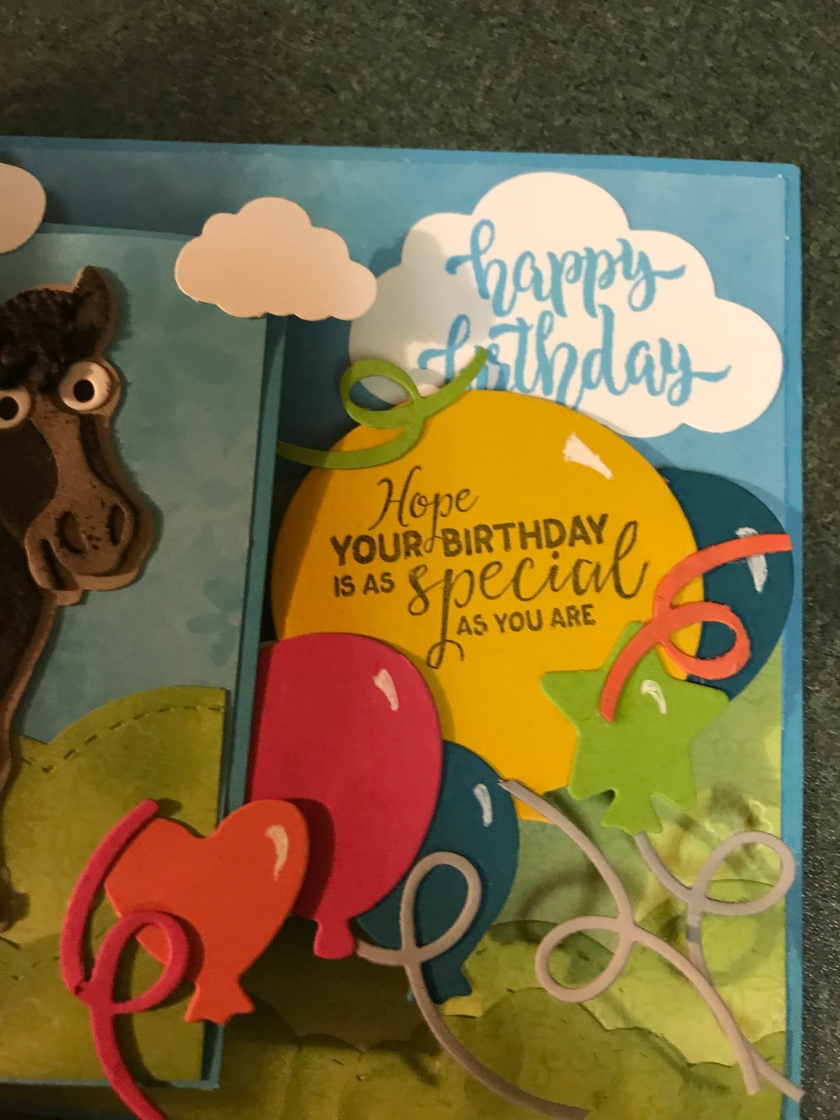